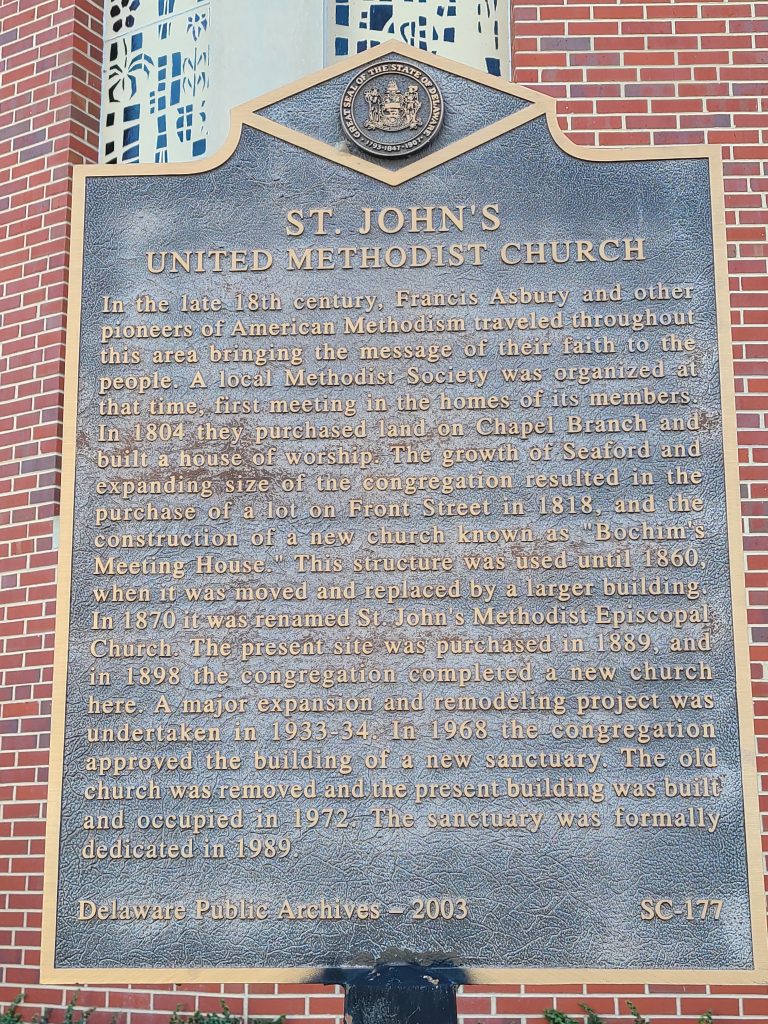 Around 1780, a small group of Seaford area men and women felt the need for a closer walk with God and started to conduct Methodist Class Meetings in their homes. By 1804, the number of people had grown significantly and it was decided that there was a need for a meetinghouse in which to worship. The meetinghouse was constructed at Chapel Branch, about one mile west of Seaford.

By 1818, the group had grown to the point that a larger meetinghouse was needed and it was decided to locate in Seaford. Theus, Bochim Meeting House was erected at Front and Poplar Streets on the site of the present American Legion Log Cabin.

In 1858, the original meetinghouse was demolished and in 1860, a new sanctuary was completed on the same site. It was consecrated as Bochim Methodist Church.

It was not until 1870 that the name was changed to “St. John’s Methodist Church” in honor of the Reverend John L. Taft, D.D. who had retired from the church as pastor in that year.

Because of the simultaneous growth of the church and the town, the property at Pine and Poplar Streets was purchased in 1889 to build a larger sanctuary. This sanctuary featured a pipe organ and beautiful stained glass windows and was completed in 1898. Growth continued to bless the church, especially in the Sunday School and Youth Ministry and in 1959, the present Fellowship Hall and education building was completed to meet those needs.

In 1968, the decision was made to build a new sanctuary to replace the old one, which had fallen into disrepair and was difficult to maintain. From 1969-1972, the congregation worshipped in Fellowship Hall as the old building was torn down and the new sanctuary was erected.

Since then, significant improvements have been made to facilities and the surrounding properties have been purchased for future expansion and increased parking. The most meaningful developments have been in the development of worship and outreach ministries. 1992 saw the implementation of the first contemporary worship service. In 1995, a Wednesday night service was established and included a fellowship meal. This has now evolved into our Wednesday evening class offerings. The 100th Anniversary of St. John’s was celebrated in September 1998 by a four day camp meeting with dinners and concerts. Praise was given for those who had vision and answered the call to serve so many years ago.